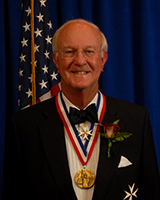 A thirteen-time member of Institutional Investor’s All-American team, Marshall is also a Chartered Financial Analyst, a member of the CFA Institute, a member of CFA Virginia and the New York Society of Security Analysts. He has participated in advanced investment seminars at Harvard and Princeton. Frequently quoted by the media, Marshall has appeared on CNN, Bloomberg, PBS, CBS, ABC, NKK, BBC, and CNBC as the guest host of Squawkbox. He has written columns for the Nikkei (Japan Economic Journal) and the Handelsblatt newspaper (Germany’s business and financial daily), and articles in Barron’s and Forbes.

Marshall is Past Chair of the Association of Governing Boards of Colleges and Universities (AGB), Past Rector of the College of William and Mary and Past Chair of the Virginia Retirement System. Currently, he is a member of the Board of Trustees of Virginia Retirement system and he is a member of the board of directors of Owens and Minor, Inc., the Charles Stewart Mott Foundation, and the Jamestown-Yorktown Foundation. He has chaired the investment committees of the William and Mary Foundation, Sweet Briar College, the Community Foundation of Richmond and the Virginia Theological Seminary.

Marshall is a graduate of the College of William and Mary and the University of Michigan’s Graduate School of Business Administration. Originally from the Eastern Shore of Virginia, Marshall and his family live in Richmond, Virginia.