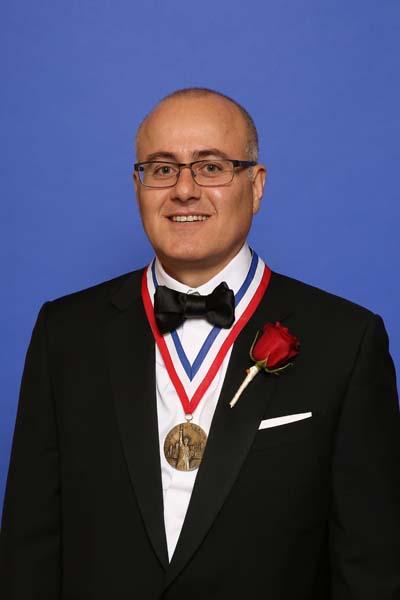 An immigrant and true believer in the American dream,Masoud was born in Lebanon and raised by a loving blue collar middle class family. He landed in New York in the late 80's with one mission on his mind. The mission was to fulfill his idea of the American dream. Masoud worked hard and accepted low paying jobs to make ends meet and quickly adapted to the American culture. In 1990, along with his brother, George, he founded GMA Accessories Inc., the parent company of Capelli New York, Ballet Jewels and GMA Shanghai Company Ltd. An international apparel manufacturer and importer of fashion accessories for women, children and men, GMA Accessories is now an industry leader.

As the Sr. Executive Vice-President, he uses his skills in logistics and distribution to ensure that Capelli New York products are sold to the biggest retailers worldwide. He oversees over one million square feet of warehouse and distribution space in the USA and China. Capelli New York offices are located in North America, Europe, and the company owns and operates three fashion factories in Asia. GMA Accessories Inc. and its conglomerate of companies are operated by 500 employees and 3000 factory & distribution center workers worldwide.

Masoud also makes time for his personal hobbies. He owns a private membership, by invitation only, recreational skeet and trap range located on a spectacular operational 90 acre farm. His farm along with his other properties both domestic and international make up his vast and diverse real estate portfolio. Masoud is also a majority shareholder in an investment company which builds residential homes throughout the tri state area. He is a big soccer fan, having traveled to many countries to watch FIFA events. One of his New Jersey properties is the home of the soccer team, Cedars Stars Academy, which is ranked among the first in the state of New Jersey.

Masoud speaks four languages and travels the world for both business and pleasure. He is an active member of the legendary Union League Club and a member of the advisory committee to the Logistic Center of a prominent New Jersey university. He is also an active member in his Catholic Lebanese community and a philanthropist. Masoud is a generous contributor to the Altirs Foundation which is a scholarship and education fund. He supports many worthy causes and projects every opportunity he gets and regularly gives back to the communities in which he is a part.

He, his wife Nadia and their five children reside in Saddle River NJ.